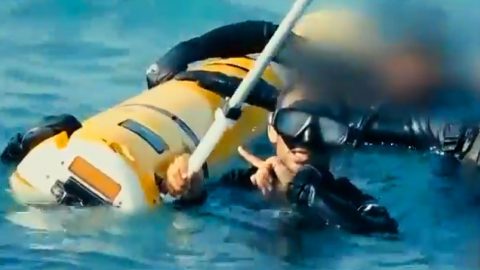 While sailing out on the high seas you can always count on the US Navy to be the first line of defense. Despite the power of the American Naval Forces, there are still those out there who seek to be a thorn in their side. Recently a group of Houthi Pirates hijacked a US Navy Vessel and the incident was recorded on tape.

Piracy is no joke and the group who calls themselves the ﻿Houthi Navy﻿ is about to find themselves in deep water after messing with the US Navy. They were recently filmed hijacking one of the Navy’s unmanned underwater vehicle off the coast of Yemen.

The REMUS 600 UUV named Smokey operates in coastal waters looking for mines and performing reconnaissance work. It may be just an unmanned vessel but that doesn’t make stealing it acceptable. The REMUS 600 is performing a necessary duty and with a price tag of $1 million, it doesn’t come cheap either.

An investigation is underway to recover the lost UUV, the film of the theft has posted in the following link.