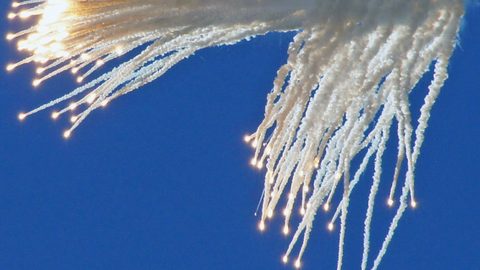 As time goes on enemy defenses grow strong, so the United States Air Force must grow stronger. To grow stronger weaponry has to hit harder in order to penetrate powerful defenses. The latest plan of strength is a system of using a swarm of low-cost cruise missiles to overwhelm a target.

This new weapons program will be known as Gray Wolf and implement a system of swarming missiles. This technology can easily be upgraded, updated and implemented into aircraft such as the F-16. The long-term goal is to implement Grey Wolf weaponry into a variety of military aircraft everything from the F/A-18 to the B-2 Spirit.

“Lockheed Martin’s concept for the Gray Wolf missile will be an affordable, counter-IAD [integrated air defense] missile that will operate efficiently in highly contested environments.”

Lockheed Martin is spearheading the program with a $110 million budget to create the technology and integrate it into military aircraft. The program is still in its infancy but the idea of using cheaper weapon technology for more effective results it well-received idea. This clip shows some of the missiles that inspired the idea which will eventually become Project Grey Wolfe.