How A Lone US Soldier Tricked 15,000 German Troops Into Surrendering 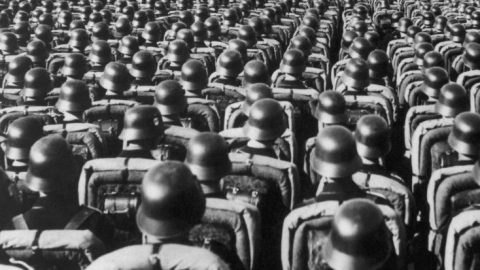 There are many stories of heroic warriors facing incredible odds during wars and coming out in one piece. The definition of courage is to keep going and do the right thing despite being consumed with absolute fear. There is courage in battle despite fears, but walking up to a group of 15,000 German soldiers and walking away with your life is another thing completely.

Captain T. Moffat Burris was a just 24-year-old soldier as the Allied Forces invaded Germany in 1945. His unit was only 90 miles from Berlin when they received orders from General Eisenhower not to proceed any further and let the Russians do the fighting. Burris had come too far to sit this one out and despite orders, he jumped into a jeep and started heading straight into German territory.

“I can’t stand this any longer. Let’s go across the river and see what we can see, see if there are some Krauts still over there.”

It didn’t take too long before Captain Burris was staring down a panzer division which included 15,000 German troops. He walks right up to the massive horde of army units and says the boldest words anyone has ever said.

“I am here to accept your surrender.”

The troops thought he was joking, no way a lone soldier could sway so many men. But calmly and collectively Burris told them that they could either surrender to him or suffer a worse fate to the Russians approaching behind them. After convincing the troops that the war was over and that they were only delaying the inevitable the entire Panzer division laid down their arms and went along quietly.

Now in his 90s Captain Morris still tells the story like it happened yesterday, check out this video for the whole story.