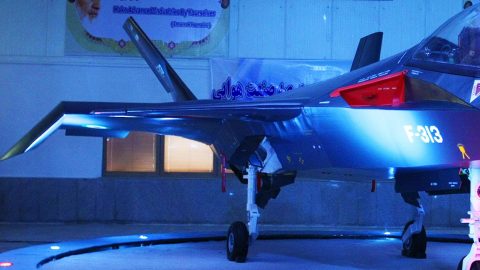 It seems that every major military power is building its own 5th generation stealth plane nowadays. Russia has their Sukhoi PAK FA, the U.S. the F-35 Turkey and China their J-31 right outta U.S.’s plans. Now, Iran is trying to join the ranks.

They publically announced their plans for a stealth fighter back in 2013 and just rolled out their creation. From our research, we found out that they designed the whole platform by themselves without any help from other countries.

According to numerous opinionated articles, however, experts stated that this is a “very sleek plastic model,” and that it’s a “laughable fake.” Others go as far as saying that it’s just plastic pasted to an old airframe to make it look modern.

Its specifications are as follows:

Does it fly you ask?

Well, nobody really knows. Iran released a demo flight in which this supposed aircraft was maneuvering but the video was so blurry and pixelated that it’s not worth even watching. An expert actually said that it was probably a remote controlled plane, but who knows?

For now, we just get to see a little ride around the runway and that’s it. If that footage emerges, however, we’ll let you know as soon as we find out.