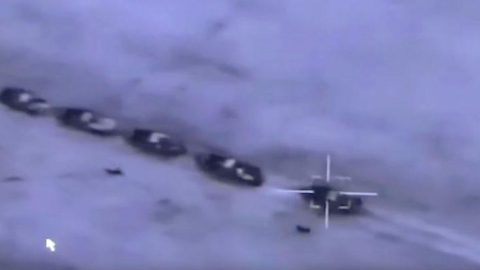 As the Islamic State In Syria (ISIS) continues to spread terrorism throughout the Middle East they have made quite a few enemies. These enemies have bigger and more powerful weaponry, the kind that brings terror to the terrorists as payback for the carnage they bring. Unfortunately for ISIS, they have made enemies in many places, not just the United States but even Russia is a mutual enemy of their group.

“The Western-backed, Kurdish-led Syrian Democratic Forces have commenced the operation to liberate Raqqa-actual from ISIS and are already taking ground. Sensing the inevitability of their defeat by a much better fighting force, ISIS is attempting to retreat south to Russian-held Palmyra and southeast down the Euphrates to Deir ez-Zor, the largest city in eastern Syria, in which the Islamic State still has a significant foothold.”

In this video, you can see a large ISIS Convoy fleeing the city of Raqqa while under siege from Russian military aircraft. The film is taken all behind a crosshair so you can see the ISIS vehicles lined up before they are blown up by the Russian Air Force one by one.