Plane Got So Low It Snagged Something Off The Ground 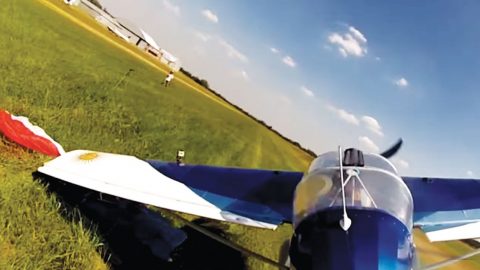 It Was All Planned Of Course.

We know what you folks are thinking. The anecdote about old and bold pilots, but let us assure you, this guy is both. (Well, not “old old” but getting there.)

We’re talking about Cêsar Falistocco. That is the man behind the controls of the plane you’re going to see in the video. Born into an aviation family, he accompanied his father to a flying club before being old enough to join Military Aviation School.

Graduating as a 2nd Lieutenant, he flew F-86 Sabres for three years. Dedicating the rest of his life to aviation, he became a professor of Mathematics after his military career was over. He also worked on experimental planes, eventually becoming the leader of the Argentinian Aerobatics Squadron.

All in all, this is a man who loves to fly and to push boundaries. As you’ll see here, he prepared a pretty dangerous stunt to promote his aerobatic team.