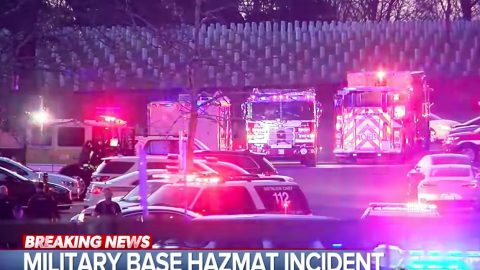 An envelope containing an unknown substance was received, today,
aboard Joint Base Myer-Henderson Hall. Personnel in the affected building took immediate preventative measures by evacuating the building.

Various reports state a certified letter was sent to one of the main buildings. Upon opening, there was a still unknown substance inside which caused 11 people to fall ill. The symptoms included burning sensations of the hands and face, nosebleeds and sore throats. Out of those, 3 people were rushed to the hospital and are now in stable condition.

“Personnel in the affected building took immediate preventative measures by evacuating the building. Base officials are coordinating with local hazmat teams and the FBI. Several Marines are receiving medical care as a result of this incident.” Marine Corps’ Official Statement

Immediately after it was acknowledged, EMTs, the fire department and HAZMAT teams came to investigate and closed off the building. A decontamination area was constructed to screen every worker/ Marine and specialized teams were sent into the building to check for signs of any other foreign substances.

The letter was sent to the FBI for screening and will be further investigated by the bureau.