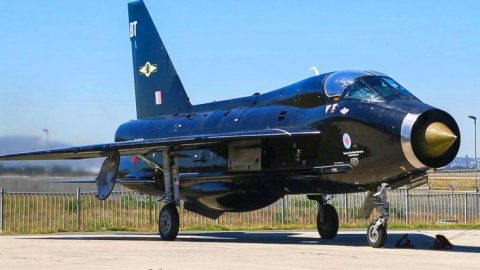 During the Cold War, the Americans and Russians weren’t the only big players, the British were in the game too. Great Britain was cautious of a nuclear strike against their country by the Russians. To stop Russian bombers from nuclear attacks Great Britain created a supersonic interceptor, the English Electric Lightning.

Introduced in late 1959 the English Electric Lightning was an interceptor capable of reaching speeds of Mach 2. The Lightning’s amazing climb rate allowed it to reach the altitude of enemy bomber planes rapidly and target using 30 mm cannons or onboard missiles. Although the English Electric Lightning was the primary interceptor to thwart nuclear attacks, it was never used for combat purposes.

“While in RAF service, the Lightning never fired a shot in anger, it was possibly one of the most aggressive looking aircraft ever to fly and was certainly the backbone of the air defense of Great Britain for many years. The epitome of British fighter design – short on fuel but immensely powerful and maneuverable and with more character than any of its contemporaries – the Lightning was the first, and last, all-British supersonic fighter.”

While over 300 English Electric Lightnings were built, there are a few able to taxi yet only one is in flyable condition. Through the efforts of the skilled engineers at Thunder City in South Africa, an English Electric Lightning T5 was brought back to life. This loud supersonic interceptor is a dream come true as it bolts up into the sky, this clip is not one you should miss out on.