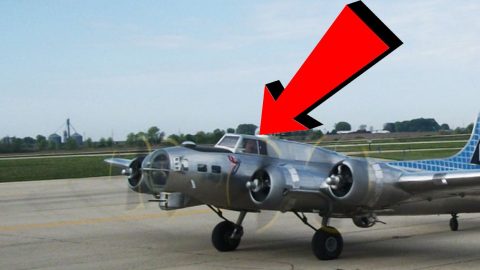 Let us start off with a short disclaimer. This isn’t the best footage of the takeoff because the camera person lost track of the B-17 for a second, but you will see it in the air. We’ve scanned through Jack’s Facebook page and he said that this wasn’t an official photo-op and we shouldn’t treat it like so. In summation, don’t rip on this guy because he poured his heart and soul into this project. He said an official video will be coming soon. As soon as it’s up, we’ll make sure all of you know.

Moving on, we’ve been tracking this project for years now. If you’re not familiar with it, you can read the full story on this build here.

For those of you who are not keen on reading too much, here’s a quick rundown. Jack Bally of Illinois has been building this 1/3 scale monster since 1999. He spent roughly 25,000 hours making it in his spare time. The whole thing weighs 1,800 pounds and has a wingspan of over 34 feet.

Oh, did we mention it’s manned? Yeah, it’s not a remote control plane. There’s an actual guy inside there flying it.