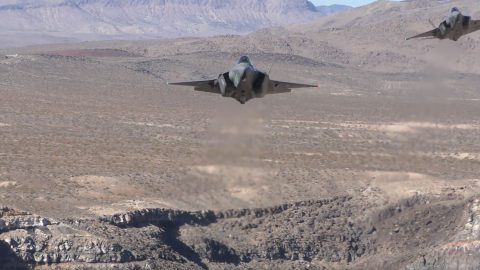 Who doesn’t love a good buzz? We’re not talking about booze of course (although, you know, “wink wink”), but a proper buzz by a plane definitely has the ability to raise your heart-rate and get that adrenaline flowing.

Such is the case in this video.

Captured by Dafydd Phillips and reposted on various aviation pages, this is one of the best Lightning II videos we’ve seen in recent memory.

The countries who opted to procure the F-35 Lightning II are: United Kingdom, Italy, Netherlands, Australia, Canada, Denmark, Norway, Turkey. There are a few others thinking of purchasing in the future.

With the Dutch being one of the customers to buy the F-35 Lightning II, they were invited to Death Valley, California, for a photoshoot. This is a typical place where the United States Air Force practices low altitude and mountain maneuvers and the Dutch Air Force got to play there too.

As you’ll see, they didn’t do so bad or it was possibly the photographer we mentioned above that captured them so well. Two F-35 flew right over him when he was standing on the top of a mountain, a feeling we’re sure, he won’t be able to shake for a while.