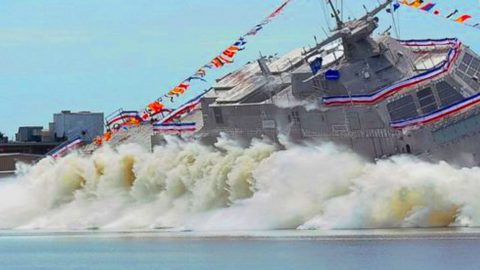 The United States Navy is always expanding with new submarines, aircraft, crewmen and of course ships. These vessels represent the backbone of the Navy in order to maintain peace and order throughout the world. However, the American coastline also requires a line of defense and the Navy’s newest vessel the USS Little Rock was built for that job.

The USS Little Rock is a Littoral Combat Ship (LCS), which will serve along American coastlines as the first line of defense. The LCS is the fastest ship in the American fleet able to reach speeds up to 51 miles per hour with a range of 4,300 nautical miles. This LCS will be commissioned soon and will operate out of Naval Station Mayport in Florida.

“We started this grand adventure in April of 2015 when we were approached with the possibility that Buffalo would be the sight for the commissioning.”

But not everyone is happy about this new ship because there is opposition to the LCS program. These ships come with a price tag of $300 million and have been criticized for only operating in small areas. The ship is also made of aluminum which is much more vulnerable to fires and attacks. They also are mainly used to summon larger vessels in the event of an attack, the equivalent of a mall security guard calling the police.

Regardless of the opposition, this vessel will be commissioned soon. This video shows the first glimpses of the USS Little Rock in action.