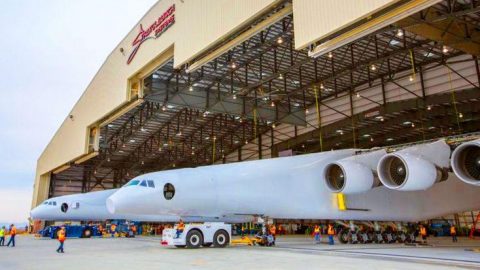 A little over 40 years ago a man named Paul Allen teamed up with Bill Gates to start a little software company called Microsoft. That little startup has grown a little bit more in those four decades and has added a little bit to Paul Allen’s pocketbook helping him pursue his true passion, the world of aviation. From endeavors such as the Flying Heritage Museum and expeditions to find great relics of WWII, his philanthropy knows no bounds. Recently Allen unveiled his biggest project yet, which just happens to be the biggest plane ever built, the Stratolaunch.

With a wingspan reaching 385 feet the Stratolaunch exceeds the Spruce Goose’s previous record by 65 feet. This massive twin-fuselage jet is designed for the purpose of carrying rockets which will launch satellites into space.

“Over the coming weeks and months, we’ll be actively conducting ground and flight line testing at the Mojave Air and Space Port. This is a first-of-its-kind aircraft, so we’re going to be diligent throughout testing and continue to prioritize the safety of our pilots, crew and staff. Stratolaunch is on track to perform its first launch demonstration as early as 2019.”

The Stratolaunch could make delivering satellites into orbit much easier and more cost-effective if all goes as planned. It may be a little while before we see it in action, but just see how big this thing is when they roll it out in this clip.﻿