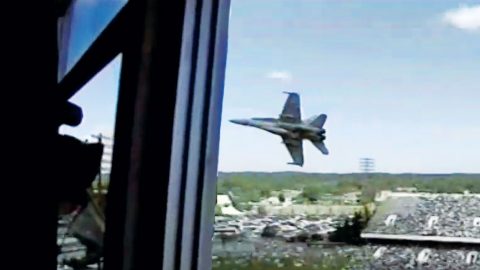 Make You Want Hotdogs For Some Reason.

There are certainly two sides to this we can foresee when you aviation folks watch this video. There’ll be the “man, that was a killer flyby. Wish I was there,” crowd. Then, they’ll be “I want his butt on a platter” crowd.

Sure, we get it. Rules are set in place for the safety of both the pilots and people on the ground. Without them, the military wouldn’t work. It was still however, a killer flyby.

Although more than a half a decade old, this video is still epic. During the game with TCU which the Navy hosted back in 2010, the pilot responsible for the flyover wanted to make it a bit more spectacular than usual. Coming in, he actually dipped into the stadium and pulled out immediately. Definitely not regulation altitude and speed, but spectacular nonetheless.

We’re sure there weren’t many people at that game complaining though. They might have been shaking in their boots for a moment there, but definitely in a good way.

We certainly wish we were there.