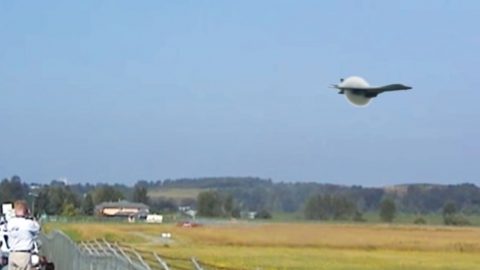 Sounds Like Someone Is Going To Have A Bad Day.

We certainly hope that these bad to the bone (get it?) B-1s were heading out to take some names. Although it looks like that might have been an airshow because of the amount of people outside that fence, we’d like to imagine that they were deployed for some vengeance on the bad guys. One can only hope.

The spectacular takeoffs start 1:20 into the video while the flybys you don’t want to miss start at 4:20.

The quality here is not exactly top notch, but the video is well worth it. The Youtube uploader, Graham A, put this up in 2007 but wrote that he took the footage back in 2001. If it was an airshow, however, they sure don’t make them like that anymore. What’s the last you ever saw a B-1 Lancer flying overhead at one of those? Exactly, probably around the turn of the century.

As for the video, it’s a bit longer than we usually show you, so feel free to skip around. It’s about 5 minutes long and shows everything from the screaming takeoffs to the flybys with vapor cones. Don’t’ miss those parts, they’re awesome.