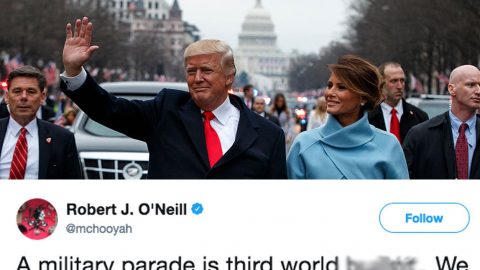 Recently President Trump announced that he wants a parade to demonstrate the military power of the United States. However, the decision to display has the country’s military might has stirred up a bit of controversy. One of the people who is taking issue with the parade is the Navy Seal who killed Osama Bin Laden and he had some harsh words.

A military parade is third world bullshit. We prepare. We deter. We fight. Stop this conversation.

Robert O’Neil spent no time cutting to the chase about his opinions over a military parade. He has given numerous interviews about his experiences as a Navy Seal and the mission to assassinate Osama Bin Laden.

The United States has not held a military parade since the end of the Gulf War in 1991. Although the Military parade is still in the planning stages many and called it a waste of many and others were pointing out the similarities to the ones held in North Korea.

Robert O’Neill’s opinion is certainly going to catch some flak from the public. However, it does appear that he wants the United States Military to focus on more pressing issues. Where do you stand on the issue?