New Expedition Drastically Changed Our View Of The USS Indianapolis 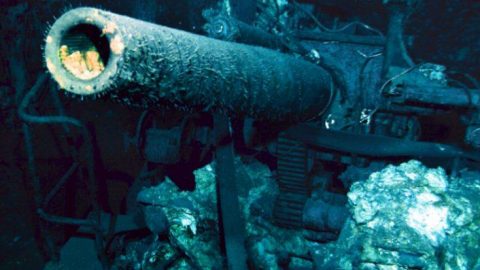 A little while back an underwater expedition discovered the remains of the USS Indianapolis after being lost for 72 years. The initial discovery sent shockwaves through the world of archaeology and military history with a few pictures. Now a more thorough expedition has commenced and has brought back very interesting findings of the sunken vessel.

The USS Indianapolis was destroyed by a Japanese submarine after completing a classified mission to deliver essential materials of the atomic bomb. The vessel sank without being about to send a distress signal, leaving the survivors to fend for their lives. Over the next four days, the survivors faced thirst, sun exposure, starvation and shark attacks with only 317 crewmen of 1,196 surviving the ordeal.

The followup expedition was documented in an hour-long high definition live broadcast by PBS. They were able to do a more thorough examination of the wreckage and found that the condition of the USS Indianapolis is much better than expected.

“The hull the structure is uniquely intact and it’s well preserved. It’s unbelievable the condition.”

Despite the submarine attack and the decades of exposure to marine environments, the USS Indianapolis is holding up quite well. The location of the vessel has not been publically revealed and will continue to serve as a memorial to the sailors who lost their lives in the tragedy. The film of the new expedition can be viewed in this clip.