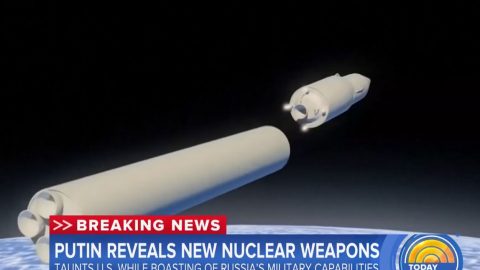 On Thursday morning, March, 1st, 2018, Russian President Vladimir Putin delivered a stern speech in front of his political constituents just two weeks before elections. Recent polls indicate he’s the frontrunner and his reelection is nearly certain, but he still chose to bolster his position with the following message.

Russia’s been actively developing nuclear weapons and their delivery systems for decades and is bent on surpassing any capability of the United States. Putin came up with a laundry list of new technologies including a new ICBM (intercontinental ballistic missile) capable of hypersonic flight, an underwater nuclear drone and other weapons such as lasers to showcase the massive strides the Russian military has taken.

Although the U.S. has many of the same capabilities, Russia is catching up and has an endgame in mind. Putin stated:

“We will view any use of nuclear weapons against Russia or its allies, be it of small, medium or any force, as a nuclear attack on our country.” | Vladimir Putin

This was, of course, hinted at the United States attacking China or North Korea. Putin also went on to say that response to such aggression will be immediate and the U.S. and U.N. should not have any doubts about that.

The news clip below will tell you more about the new supersonic ICBM which is the main concern for U.S. officials. If it works as it says it does, measures will have to be taken to counter such a great threat.