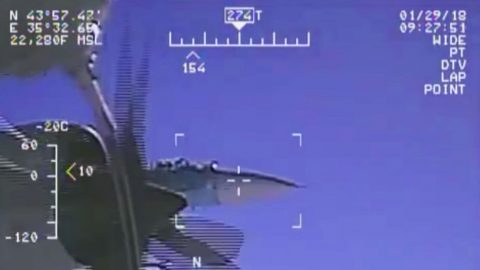 Yesterday, January 29th, 2018, a U.S. EP-3 Aries reconnaissance aircraft was intercepted while flying over the Black Sea. Beyond all doubts, the airspace was international although close to Russia.

That being said, the media has been all over this painting it as some sort of anomaly. As aviation fans, we know all too well this has been happening for decades. Pilots often snapping pictures of each other and making funny faces.

This might be a bit different, however. The United States Navy released the following statement,

“This interaction was determined to be unsafe due to the Su-27 closing to within five feet and crossing directly through the EP-3’s flight path, causing the EP-3 to fly through the Su-27’s jet wash. The duration of the intercept lasted two hours and 40 minutes.”

We’re not exactly sure, but that video doesn’t really look like five feet. It might be a telephoto effect or something of the sort, but honestly, it’s not something to get overly excited about not to mention go to war over.

Just our two cents. Let us know what you think in the Facebook comments.

UPDATE: The video below is a montage of both the videos. The first one of is the different angle which shows that wingtip to wingtip the Su-27 might have really been as close as mainstream media claims.

The other clip is the one that was released yesterday which made it harder to assess the distance between the two aircraft.

Here’s the new angle released by the Navy. Judge for yourself.