News | In A Turn Of Events, Russian Fighters Intercept B-52 Bomber 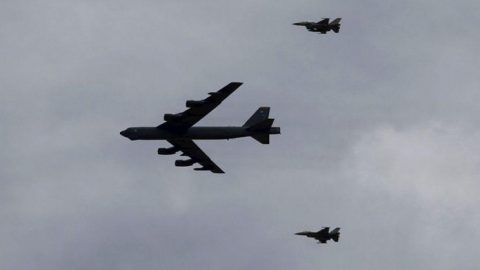 We typically hear of the United States intercepting Russian bombers by their borders. Every so often (recently more often,) Russia tries testing the U.S.’s readiness by flying close to Alaska. Immediately, fighter pilots scramble, get in their jets and escort the nice men back to where they came from.

As the United States trains with NATO forces in Europe, Russia is paying close attention.  On June 6th, 2017, a B-52 Stratofortress crew was flying in international airspace when two Su-27 Flankers pulled up to it.

The bomber crew was flying over the Baltic Sea by which Russia has an air base. They apparently thought it was too close and flew up to the bomber and signaled them to turn away, which they did.

The United States has not issued a statement about the incident at this time other than confirming that it happened, but Russian officials had a lot to say.

Calling the flight by its borders “disrespectful” as they’re well aware that B-52s are capable of carrying nuclear weapons, they warned that such actions will not help de-escalate an already tense situation. Both countries are in the middle of a silent cold war and a stupid mistake could lead to something bigger.

The event was covered by all major news networks.