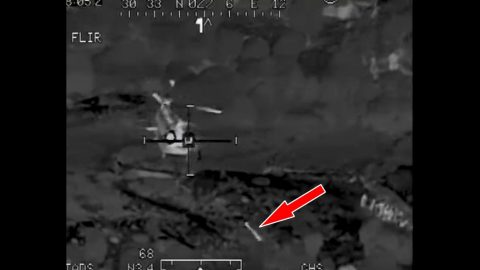 They Don’t Call It An RPG Magnet For Nothing.

In this video, you’ll see the CH-47 Chinook live up to its name. Literally.

Aside from being called “Shithook” and other names we won’t write here, “RPG Magnet” is one name this transport helicopter has earned and for good reason. As they’re used to transport equipment and troops, they are naturally valued targets for the enemy. Shoot one down and you can deprive the force of a few dozen troops and one more bird to bring more in.

In this case, that’s exactly what happened. Back in 2012 U.S. forces conducted a night raid in Afghanistan. Lingering until another ship catches up to them, they might have stayed in one spot too long and got hit from the back.

You can see a piece of the Chinook fall off (most likely the ramp). The pilot says, “We’ve got mortar fire on Vegas at this time,” and casually flies off. No panic. No unnecessary emotions. True pro.

If you look closely, you can actually see that scumbag standing there on the bottom right corner of the screen. He was probably already yelling his favorite phrase and soon realized that he merely put a dent in that bird after which he quickly ran away.

According to media reports, some of the crew suffered minor injuries but none were killed.