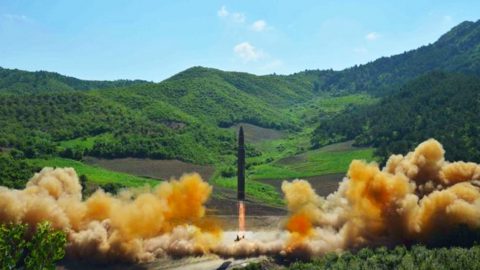 We’ve been covering the doings of North Korea for a while now and they’re simply not letting up. They keep on pushing their nuclear testing forward even after receiving stern warnings from around the world, last night being no exception.

At 11:42  p.m. local time on Friday, July 28th, North Korea launched another ballistic missile to test their capability. Japan’s Chief Cabinet Secretary Yoshihide Suga told reporters that their systems detected the launch and believe the missile landed about 230 miles from Japan’s coast after flying for about 45 minutes, exceeding their previous time in the air. Local vessels in the area were alerted to the threat.

Suga said the missile is believed to have landed in Japan’s exclusive economic zone.

As always, the Pentagon released a statement to the effect of, “the world needs to do something about this and current sanctions are not working.” As this was the 14th ICBM North Korea tested this year, the threat is not so much the missiles they have now, but the fact that with all that testing they’re quickly progressing to having one that can actually reach the United States and other countries around them.

The chief of staff of the U.S. Army was quoted saying, “the United States military, in combination with the South Korean military, would utterly destroy the North Korean military — but that would be done at a high cost in terms of human life.” The economic sanctions which were placed on North Korea are meant to prevent that, but they don’t seem to be working.

The sources of this story can be verified on BBC, CNN, USA Today and other media outlets from around the world.