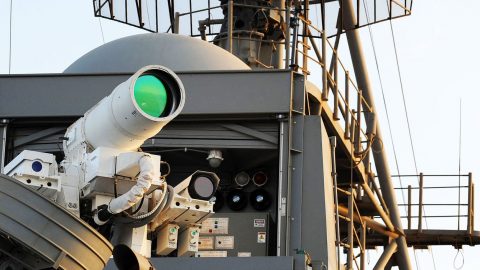 The Navy has been working on getting an effective laser weapon since 2010. Contracting Kratos Defense & Security Solutions, the weapon was finished and field tested only 4 years later in 2014, successfully shooting down drones and stopping boats in their tracks. After a year of testing its overall effectiveness and durability in a maritime environment, it’s officially part of Navy’s arsenal.

For now, it’s going to remain permanently on the USS Ponce which was used to test it in the first place. The Austin-class amphibious transport dock reported that the weapon performed flawlessly over the course of testing and is now authorized to use it as a defensive weapon.

The laser, officially called AN/SEQ-3 Laser Weapon System or LaWS for short, uses an infrared beam to disable its targets by generating an electromagnetic pulse. The advantages of such weapon are endless.

“The solid-state laser is a big step forward to revolutionizing modern warfare with directed energy, just as gunpowder did in the era of knives and swords.”-Peter A. Morison | Program Officer

For one, it only requires a crew of three to operate. Secondly, it only needs a small generator to fire its beam which costs about a single dollar to do so. Compared to the cost of a ballistic missile which would be otherwise used to shoot down a target, that’s a massive cost saver.

Also, the laser travels about 50,000 times faster than a missile and is far more accurate. Add to that the fact that it’s silent and invisible to the human eye, you’ve got yourself the perfect weapon. The range of the laser was not yet disclosed and might never be.

The laser could also be scaled down in power to be used against enemy personnel to cause discomfort and retreat, but as of now is not permitted.