News | Thunderbird F-16 Crashes And Flips Upside Down During Practice 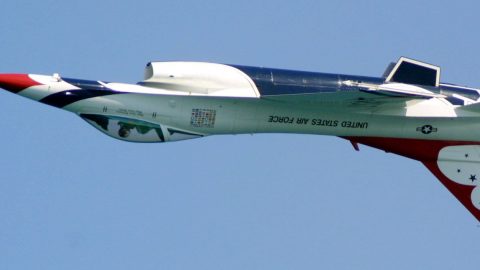 The Thunderbirds are a United States Air Force display team who use F-16s as part of their demonstration. Like the Blue Angels of the Navy, they’re a recruiting tool which draws major crowds that want to see the dedication and discipline of the respective branches of the military.

USAF Thunderbirds were conducting a familiarization flight June 23. There was a mishap upon landing at 12:20 p.m. More info to come.

The team is comprised of the best USAF pilots who train continuously to show their crowds the tightest formations while performing them safely.

Not all goes according to plan all of the time, however.

Just over an hour ago at around 12:20 p.m. E.S.T., June 23rd, one of the Thunderbird F-16s flipped over while landing. The incident happened at the Dayton International Airport.

Emergency crews arrived at the scene as we’ve seen by the two pictures that are now available, but there is no word on the condition of the pilot.

We’ll update this post throughout the day as details come to light.