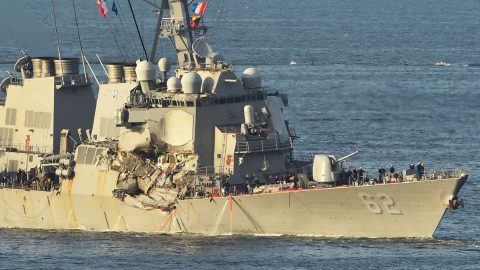 Our Hearts Go Out To All Those Affected.

On the morning of June 17th, 2017, a Filipino vessel by the name of ACX Crystal hit the side of USS Fitzgerald. The incident occurred off the coast of Yokosuka, Japan. In an official statement from the Navy, Vice Admiral Joseph P. Aucoin noted that the collision occurred at 2:20 a.m. local time while most of the crew was asleep. The bridge was manned by less the twelve people.

The cargo ship which hit the USS Fitzgerald was reported to have made a 180 degree turn before the collision. Four times the size of the Navy destroyer, it caused major damage to the sleeping quarters when it hit below the water line. 116 compartments were flooded, including the 7 of the now confirmed dead sailors. The ship’s captain, Commander Bryce Benson was also seriously hurt and had to be airlifted.

All 20 crew members of the cargo ship have been interviewed and the investigation is ongoing. There is no concrete reason explaining why this happened as of now.