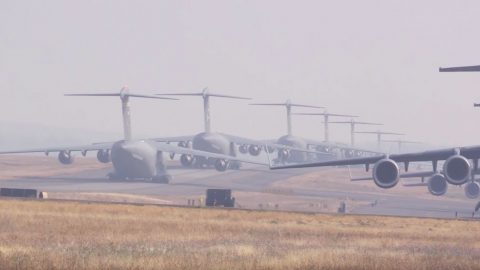 From July 31st to August 11th, 2017, the United States Air Force and its allies are conducting an exercise codenamed Mobility Guardian as part of their training. The purpose of this exercise is to have airmen and crews practice their skills that they might have not used in a while or only learned about without ever performing them.

Durin this period, over 3,000 personnel will be participating which includes U.S.’s allies from over 25 countries. Some of the tasks evaluated are to quickly and effectively load cargo planes as well as to prepare refueling aircraft for mission support. Then, the mass takeoff.

“Mobility Airmen are often the first to arrive and the last to depart a forward operating location. They provide continuous support to the joint warfighter. Simply put, success requires our Total Force team of mobility Airmen to work together with joint and international partners. Exercising our capabilities together is critical so when we are called upon, we can deliver quickly and precisely.”    -General Carlton D. Everhart II, AMC Commander

In the video below the Air Force released, you’ll see elephant walk clips of C-17 Globemaster IIIs, KC-135 Stratotankers, and C-130 Hercules. Launching dozens of aircraft is no small feat and as far as it was reported, all exercises went smoothly.

This exercise is designed to show the AMC (Air Mobility Command) the capabilities of their personnel and to assess strengths and weaknesses for future improvement.