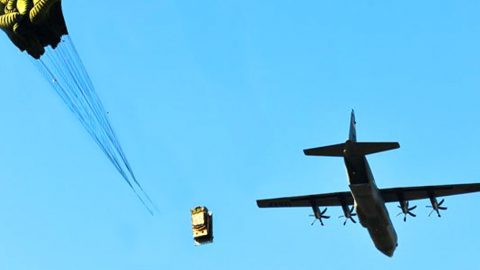 One fine day in 2016 at the Hohenfels Training Area in Germany, the Army was performing a training exercise in which they were air-dropping equipment from C-130s. A video was recorded of three Humvees tumbling to their total destruction. The insane footage ultimately made its why to YouTube where it became viral.

There are two men who probably regret that happening. And that’s because what happened was not an accident. Guilty Of Destruction Of Government Property

Army Sgt. John Skipper, then 27, was found guilty of actually cutting the straps that were meant to keep the Humvees secure. Military Humvees can cost anywhere between $70,000 to $220,000 USD depending on the armament and equipment inside, and in this case, three were lost.

The soldier who filmed this incident was also given a letter of reprimand for laughing during the whole ordeal (see video below). Christian Marquardt, the spokesperson for the 7th ATC was quoted,

“The reprimand addressed the unprofessional comments the soldier made during the video, and the fact that he shared the video with others, which resulted in it being posted to social media by an unknown individual.”

Sgt. Skipper faced some serious charges – up to 10 years of confinement for the three charges of destruction of government property and one charge of lying to investigators. He got off a little easy, though, with a reduction in grade to E-1 and a Bad Conduct Discharge by a court-martial panel consisting of enlisted soldiers and officers. What do you think of that?