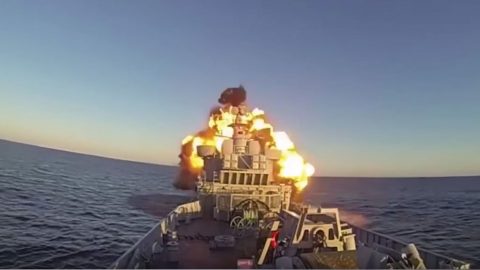 Amazing How Much Damage A Small Missile Can Do.

There are a couple of things at play here that some of you will notice. The missile flew uninterrupted with the ship not deploying any countermeasures. No chaff, no scrambling and no littering the sky with lead. Either way though, this is what a direct hit from this missile can do.

This ship is a Norwegian HNoMS Trondheim. An Oslo-class Frigate, it is the U.S. Navy’s equivalent of a Dealy-class destroyer escort. This ship was about 317 ft. long and was being decommissioned. On June 5th, 2013, it was used for the testing of a new missile called Nytt sjømålsmissil or NSM (naval strike missile) in English.

Manufactured by a company called Kongsberg Defence & Aerospace, this thing packs a punch. 13f t. long and weighing about 1,000 pounds. In this video, it also traveled 100 miles and hit its target dead on.  The results you’ll see for yourself in this video.

As a side note, in 2015 the NSM was successfully fired from an F-16 as the missile is now sold to allied countries.

Also, it’s now being rigged to be fitted to F-35 Lighting IIs for future warfare.