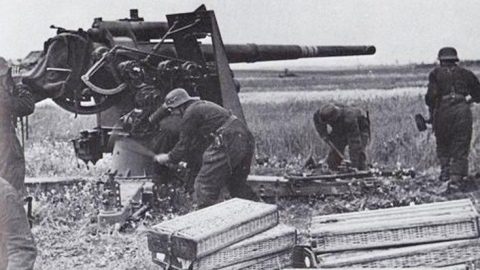 From German word Fliegerabwehrkanone which translates to “Airplane Defense Cannon” but we know it abbreviated as Flak. These overpowered artillery weapons got their start as anti-aircraft weaponry during the Spanish Civil War in 1936 but soon found their way onto the battlefield against tanks.

“In my opinion, it is unfair to use ‘flak’ against our tanks.”

– British Infantryman during a German interrogation.

The 88mm Flak had no trouble at all shredding through French Char B1-bis tanks with heavy armor and an even easier time blasting British Mk.II Matilda infantry tanks. It was easily the among most popular artillery weapons of World War II.

“The only problem with 88mm Flak series was its height and weight, which forced it into action to rely on its power and range rather than concealment. During the war 88mm, Flak series guns were used aside of the German Army by Italy and captured examples were often used by the Allies including US Army in late 1944 in Western Europe.”

Flak guns were a force to be reckoned with during the Second World War. In this rare archival footage from WWII, you can watch as German artillery units launch a powerful Flak assault against Allied tanks.