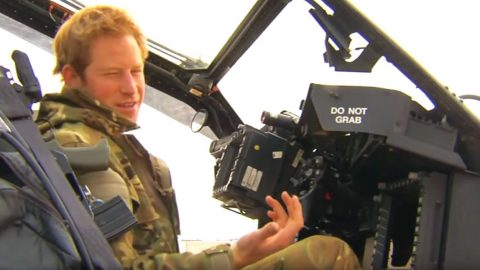 This Is Actually Pretty Funny

Let’s seriously not get into politics here. Although Prince Harry is a quite liked chap, for some reason some people don’t like him. Whatever. As far as we’re concerned, he’s a royal who didn’t need to put his neck out for the coalition, yet he chose to serve for 10 years and go behind enemy lines. The fact that he did so in an Apache makes him that much cooler too.

“There’s no way I’m going to put myself through Sandhurst and then sit on my arse back home while my boys are out fighting for their country.”-Prince Harry

After college, Harry decided to join the Army. Entering the Royal Military Academy Sanburst mid 2005, he made second lieutenant by the following year and lieutenant by 2008. During that time, the Ministry of Defense forbid him from being deployed into hostile territory because he would be a high value target.

Although he agreed to abide by the ruling, a leak to a German newspaper confirmed that he was deployed in Afghanistan and patrolled hostile areas as well as being a part of gun fights. He apparently doesn’t know the word “no” and we like that.

This brings us here. In 2008, Harry decided to do a second tour of duty and also fly helicopters. He earned his wings by 2011 and flew Apaches until he ended his Army career in 2015.

During that time however, he did have one issue flying choppers. He didn’t like to pee in them. Check it out, we’re not kidding.