Spectacular Footage Of Apache Taking Out Targets With A Brimstone 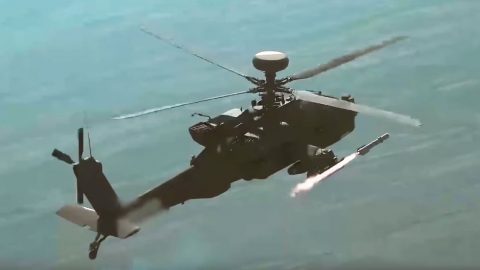 Now That Is Accuracy

This is some pretty cool AH-64E Apache footage. Shot from multiple perspectives and at different playback speeds, it displays one of the most effective capabilities of this attack helicopter, namely, firing missiles.

Not just any missiles either, it’s the Brimstone. Originally called the “fire-and-forget” missile, it was used to shoot in the general direction of the enemy and using active radar homing to hit mass targets. They now have laser guidance as well, making them extremely accurate.

For those of you scratching your heads at home thinking, “where’s the boom?,” let us explain. Although it certainly would be more spectacular, this is a practice exercise. In order to better assess the accuracy of the shot, removing the explosive element of the missile is key.

If they blew up, sure, the tank and pickup would be gone, but that could also be the case if they hit right next to them for the most part too. Without explosives, you can clearly see the point of entry where the missile casing came in. That way, you know you got a nice hit.