Destruction Of WWII’s Most Powerful Battleship – The Only Film 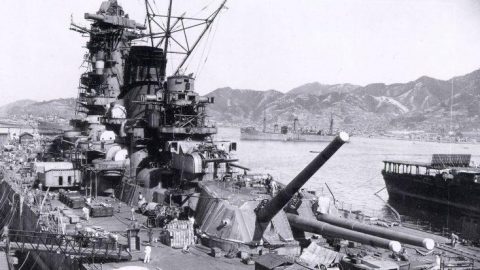 American naval vessels had to fight wars in both the Pacific and the Atlantic so their size was limited. US Navy battleships were built with a maximum width of 108 feet in order to fit through the narrow Panama Canal. But Japan’s Battleship Yamato was only intended to face combat in the Pacific so it was built with a width of over 130 feet wide and armor plating a foot thick, making it the biggest vessel of WWII.

Despite the Yamato’s massive size, it moved through the seas at an impressive speed of 27 knots. This was in part due to an innovative design is known as the bulbous bow which allows the ship to reduced waves it creates and travels with less resistance through the water.

“Besides the usual explosive and armor-piercing shells, Yamato was equipped with a unique anti-aircraft shell for use with the 18.1 inch main guns. The sanshiki shells weighed just under 3,000 pounds and were filled with incendiary tubes. These anti-aircraft shells were fired toward incoming aircraft a la flak, and a timed fuse triggered an explosion in the path of the hostile aircraft, filling the air space with burning steel shrapnel.”

The mighty battleship saw its final combat mission on April 7th, 1945 en route to the Battle of Okinawa. The Yamato left to engage the Allied forces, departing with only enough fuel for a one-way trip intending to beach itself and attack targets from the land.

However, it was ambushed by a fleet of enemy battleships and bombarded by torpedos from over 250 American planes. In a bloody conflict that lasted over three hours, the Yamato’s munitions storage took a hit and sent a fireball 2,000 feet into the sky. The Yamato sunk into the Pacific taking most of her crew.

Battleship Yamato’s destruction at the hands of the US Navy can be viewed in this clip.