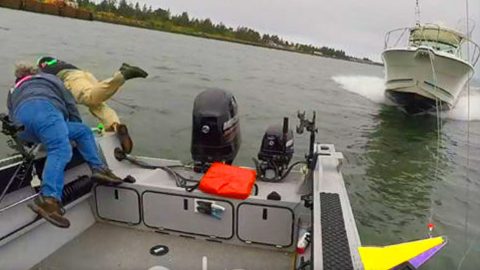 The United States Navy has come under fire recently with several officials being charged for crashes last year. However, the cause of reckless boating also extends to vessels that are not owned by the US Navy. We just found a clip of what could be one of the most irresponsible boating accidents ever recorded.

“Maess filed the lawsuit this month. The Hermiston police officer and two friends were forced to jump into the Columbia River to avoid being crushed by the oncoming speeding boat in August 2017.”

In the video, you can see a group of boaters out on a routine fishing trip. Everything is going fine until a speeding boat appears in the distance. Intuition would tell anyone behind the wheel to steer clear of a stationary boat but it just kept going. The people on the fishing boat then tried their best to get the attention of the speeding boat but their efforts were in vain.

Texting and driving don’t mix and this applies to any machinery that can go fast. Please keep your eyes off your phones while you are behind the wheel of anything for your own safety and the safety of others. No one has seriously injured in this incident but a $372,500 suit has been filed against the diver of the speeding boat for negligence.

The film of the boat accident can be viewed in the clip below.