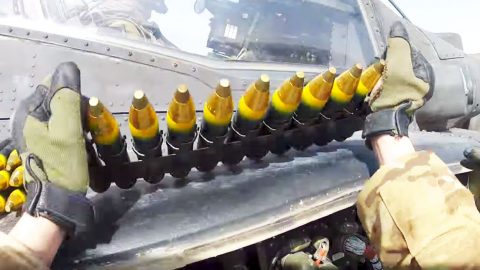 That’s A Lot To Remember.

This video is pretty neat in our opinion. Although most of you know of the power and capability of an AH-64 Apache, you probably have no idea how its chain gun is loaded, unless of course, you have done it yourself.

This video, although 9 minutes long, will show you the entire process. A YouTube subscriber by the name of Chris Feeney took it upon himself to show you exactly how it’s done. Most likely using a GoPro camera, he attached it to his helmet and proceeded to do what he was trained to do. In this case, loading up all the hurt into this Apache’s gun.

The Apache is capable of carrying up to 1,200 rounds of ammunition.

Notice how smoothly everything was done though. It only shows you the United States Army’s readiness as the Apache crew landed, waited for less than ten minutes to get reloaded and they were free to take off again and do their business.

It just great to see everything working the way it should work so we can do what we have to do. Great job.