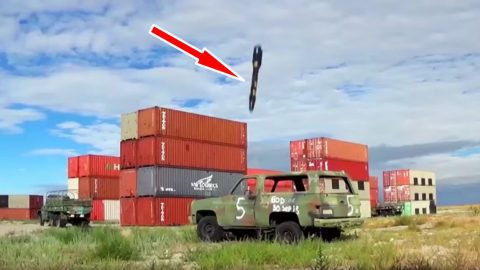 Ever See The Movie Terminator?

Although our 5th Generation fighter, the F-35 Lightning II, isn’t even complete yet, the United States Air Force is already working on 6th Generation technology. This four-minute video will go through numerous new advancements, but keep in mind that this is the information we’re allowed to know about. We’re sure that the USAF’s real capabilities would make our heads spin even more.

We already have autonomous planes. From the MQ-25 Stingray that can land on a carrier by itself to the MQ-9 Reaper that is weaponized, air warfare has advanced tremendously in the past few decades.

Here’s what is most important about this video, however. We’re building missiles and bombs that can actually learn.

Sure, we’ve had guided missiles for decades. They can be given an objective and navigate by themselves to their targets while avoiding obstacles by the use of radars and sensors.

The next generation weapons will be able to learn from past experiences though. Having access to something like cloud storage from which they can pull information, they’ll be deployed and be able to not only identify but pick a target by themselves which they deem is most crucial. With every new mission, they’ll learn how they did and base future decisions on their previous performance.

Now, this is some Skynet type of technology. Check out the video and see what else we’re working on.