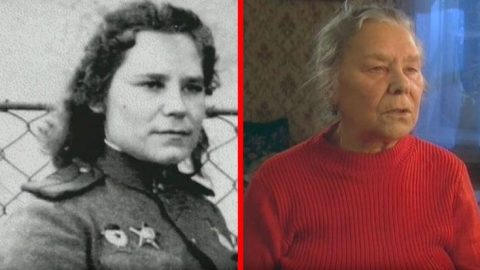 On May 7th, 1945 after a lengthy war Nazi Germany surrenders after Berlin is captured by the Soviet Union. German soldiers threw down their arms and were taken captive by Soviet soldiers as they began their occupation of the country. The Soviet Soldiers had many questions for the captured German soldiers and they weren’t always willing to talk. If their captives were not willing to talk then Soviets would be forced to coerce them by more drastic measures.

Zinaida Pytkina started off as a 22-year-old nurse tending to Soviet Soldiers in a tank brigade during WWII. She was approached by the organization SMERSH fearing that she was under investigation but they soon revealed they wanted to recruit her as an interrogator. Then as an officer from the Soviet Union’s Ministry of the Interior and Pytkina was about as ruthless as they come.

“The Germans didn’t ask us to spare them. They knew they were guilty, and I was angry. I was seeing an enemy, and my father, and uncles, mother and brothers died because of them.” Zinaida Pytkina conducted routine beatings as well as torture of German soldiers to gain information. When she was done she would simply just shoot them, throw their bodies into pre-dug graves and go inside for a quick drink. Some might label her actions as a war crime since it was be practiced on captive prisoners, but she simply claims it was a time of war. Now in her later years, she is still about as tough as they come and recalls her time as a SMERSH agent in this clip.