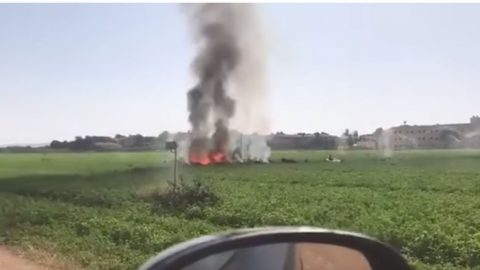 Four Eurofighter Typhoons participated in a flyover during Spain’s National Day parade. Sadly, only three of them got back to base.

After the flyover, one of the pilots crashed while approaching the runway. The plane came to its fiery end in a field in the town of Los Llanos. There is no word whether anyone was injured on the ground.

The name of the pilot will not be released until next of kin are notified. The crash is under full investigation by Spain’s aviation authority.

This crash comes just weeks after Typhoon pilot was lost in an accident in Italy on September 24th, 2017. You can read the full story here.