F-35 Reveals An Unexpected New Weapon For The First Time 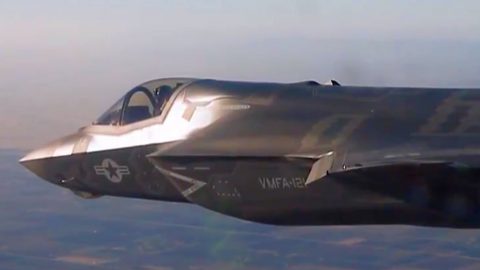 The Lockheed-Martin F-35 Lightning II remains a controversial fighter as it advances forward into the service of the US Military, Navy and Marines. The capabilities of the F-35 have been questioned in relations to costs as it claims it is the fighter for any job. It is a versatile aircraft and it has some surprises up its sleeves, the latest being the inclusion of the AIM 120 missile.

The AIM 120 will be a big asset to the F-35 in air-to-air combat, allowing it to target enemies in even the most hostile of conditions. The AIM 120 is used in several other fighters as well as ground attack systems and now making its way towards the F-35.

“It has an all-weather, beyond-visual-range capability and is scheduled to be operational beyond 2020. The AMRAAM is being procured for the U.S. Navy, Air Force and allies of the United States. In addition to providing an air-to-air capability, AMRAAM also provides air defense support.”

There are many who object to the F-35 as a means of replacing other aircraft but there is no doubt that it can adapt to many situations. Check out the F-35 trying out the AIM 120 missile for the first time in this video from Aviation Buzzword.