See How A .50 Cal Sniper Rifle Recoil Ripples Through A Human Body 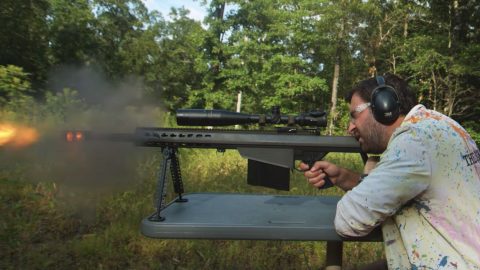 Ah, the Slo-Mo Guys. This YouTube channel ended up being a powerhouse of incredibly entertaining and educational videos, all stemming from two guys buying a really, really, expensive camera.

As for this particular video, they also got their hands on a Barrett .50 caliber sniper rifle and they let ‘er rip. The entire fiasco was of course filmed with a camera that can capture footage at over 25,000 frames a second with full HD resolution intact.

The entire video is about 9 minutes long so if you have the time watch the whole thing, but if you don’t here’s a breakdown of what they do so you have an idea of where to fast forward if you want to see a particular part.

First off, they shoot the rifle from a table from a shoulder position. This allows you to see what we’re talking about. The bullet flies out of the gun and then how far these guys move back, including their skin getting pulled back.

Then they get a bit more creative. In the next few shots, they shoot out a candle and you can clearly see the bullet doing so. After that, one of the guys lays down on the ground surrounded by leaves and you can see the blowback and gasses do some fun stuff with the dry leaves.

All in a day’s work for them.