See How These Famous Rifles Handle After A Mud Bath 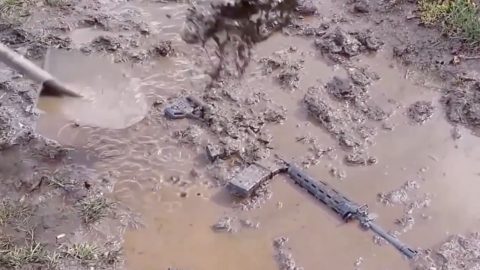 The AK-47 is arguably the world’s most reliable rifle. We might catch a lot of flak for saying that, but we think this is a consensus around the world. In terms of reliability, number produced and toughness there’s no other rifle like it. Also, and this is sad, statistically it has killed more people than any other rifle.

Then there’s the AR-15 which has been in the headlines lately and not for good reasons but it doesn’t make it a bad rifle (not trying to get political here.) In terms of reliability, it’s also not bad. It’s estimated there are upwards of 10 million AR-15s in the hands of Americans as of 2019, so it must be good.

But what happens when these things get doused it mud?

Although it might be an odd question, a YouTube channel called Desert Cayotes took it upon themselves to answer that question. Finding a deep mud pile, they not only threw both rifles in there but really got them dirty by using a shovel to pat them down even further. Then, they only drained the barrels and fired them.

As for the results, you can see them for yourself below.