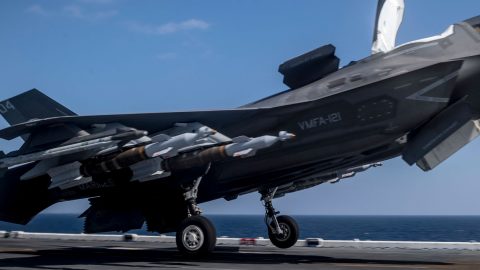 At the end of January 2019, China tested their new DF-26 “Carrier Killer” missile. The missile has been in the works since the early 2000s, officially entering service at the end of 2015.  An intermediate-range ballistic missile, it was was already tested over 16 times according to the  U.S. Air Force National Air and Space Intelligence Center, but the latest test just last month prompted a response from the U.S. Navy.

USS Wasp (LHD-1), a multipurpose amphibious assault ship, is responsible for “accommodating new Landing Craft Air Cushion (LCAC) for fast troop movement over the beach, and Harrier II (AV-8B) Vertical/Short Take-Off and Landing (V/STOL) jets which provide close air support for the assault force.” Cruising in the Pacific, it is now home to 16 F-35Bs, one of which was just loaded in the “Dump/Bomb Truck” configuration as a show of force to China.

Part of the 31st MarineExpeditionaryy Unit, it was loaded up with all the latest missiles both internally and externally. Although a stealth aircraft, this configuration simulates what would happen in an “all-out war,” meaning penetrating enemy airspace without letting their presence known is no longer a key to victory.

During this exercise, the F-35B was loaded up with 2 AIM-9X missiles and 4 GBU-12 500-lb LGB bombs. Also designed with an internal Gatling gun, this F-35 is ready for taking out targets and performing CAS (Close Air Support.)