See This Lethal Monstrosity Bringing Terror To The Terrorists 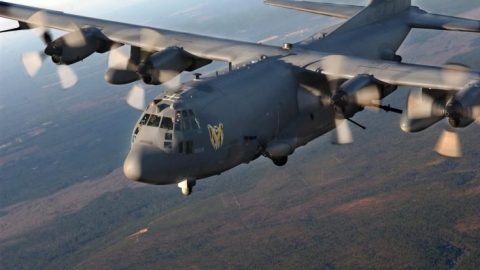 Fear is often said to be the greatest weapon against your enemies, but I think that fear might have to take 2nd place against the incredible arsenal of the AC-130. The AC-130 often called “The Angel of Death” is one of the most fearsome gunships that ever took to the sky. Operated by a crew of 13, a 132-foot wingspan and equipped with multiple machine high powered guns and flying at speeds of up to 300 MPH the AC-130 a weapon of war that can win wars by itself.

“All the time there were these jets flying around and the Taliban didn’t care about it. But there is one plane that scares them. This is that plane.”

After winning several confrontations in early days in the war on terror the United States Air Force transitioned the AC-130 into a weapon against ISIS. Recently the AC-130 has been seen destroying tanks and laying waste to an ISIS fuel convoy in a mission called “Operation Tidal Wave II.” Operation Tidal Wave II was successful thanks to the firepower of the AC-130 which helped to destroy oil production refineries and eliminate their primary source of funding.

Usually operating under the cover of night to avoid detection the gunners operate via night vision targeting systems to attack unsuspecting targets. Fear is a great weapon against your enemies, especially when it comes in the form of an AC-130.