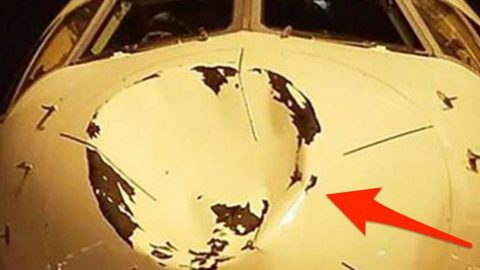 On October 28th, 2017, an NBA team was traveling between games and encountered a lot of turbulence mid-flight. When they landed, many of them snapped similar photos of the nose of their plane (see Twitter post below) saying that they felt the hit at cruising altitude and have no idea how that could have happened.

As the pictures surfaced all over the internet, so did theories as to what may have caused it. See what they had to say. Many of these folks know a lot about aviation and have either worked or flown planes.

Let us know your thoughts in the comments section on Facebook.

But No Blood No Bird Right? Not Necessarily.

A Witch Coming In For The Halloween Annual Meet-up.

Then, There’s The Obvious. Here’s Some Proof.