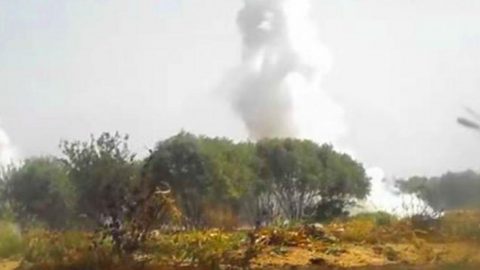 No matter how well trained a soldier is they can always end up in a compromising situation. These troops found themselves pinned down under Taliban gunfire in desperate need of help. Just when things seemed like they couldn’t get any worse they heard a sound from above and knew they were saved.

Actually, they felt the impact before they heard the sound of their safety because the shots from above move faster than the speed of sound. The troops screamed a few bad words then, there was dead silence instead of the sound of gunfire. After some foul language screamed with joy these troops knew exactly who their savior was, the A-10 Warthog. “A-10s come in for air support in eastern Afghanistan where 90 Coalition Forces are being pinned down. Using 30mm Gatling guns, the pilot had to choose his targets, while taking fire, in nearly zero visibility.”

There’s nothing like the sound of 4,000 shots per minute faster than the speed of sound ripping enemy militants to shreds. If you love the A-10 Warthog as much as I do then I know that you will be watching this clip over and over again for sheer joy.