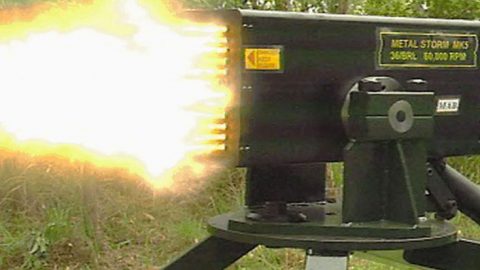 There are some pretty fast guns out there and with modern engineering, they are getting faster all the time. Since the 1960s the M134 Minigun held the world record of world’s fastest gun firing 360,000 rounds per minute. But records are meant to be broken and the Metal Storm 36 Barrel Gun dethroned the previous king by firing off 1,000,000 rounds per minute.

The Metal Storm company based out of Australia had some pretty amazing ideas when coming up with innovative weapons. The Metal Storm 36 Barrel Gun creates a rapid-fire burst of 9 mm bullets unlike any other weapon before.

“Firing within 0.1 seconds from up to 1600 barrels (at maximum configuration), the weapon system gun claimed a maximum rate of fire of 1.62 million rounds per minute – and creating a dense wall of 24,000 projectiles.”

Sadly the high-powered gun that shattered world records was never picked up by the military and Metal Storm is now defunct. There were some out there who thought that a million rounds per minute are a waste of bullets when more accurate systems like the Phalanx CIWS could be used. If you have yet to witness this insane gun in action just watch this video to see and hear what a million rounds per minute is like.