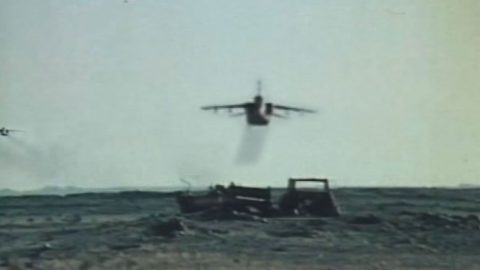 Quite The Competitors At Red Flag.

This two-minute video will give you the best introduction to one of the least talked about fighters. If you’re from the U.S., you might not have even known about them. (We’ll confess. We’re one of those Americans.)

The SEPECAT Jaguar was designed for the Royal and French Air Forces back in the 60s. It’s primary role was a trainer, but was later fitted for reconnaissance and tactical nuclear strike purposes.

Well over 500 Jaguars were produced between 1968 and 1981 and some are still active in the Indian Air Force.

The actual video is pretty sweet too. Although filmed way back when, the shots are incredible even though they’re in pretty low resolution by today’s standards. The low level passes over the desert floor on by the canyon walls will get your blood pumping for sure.