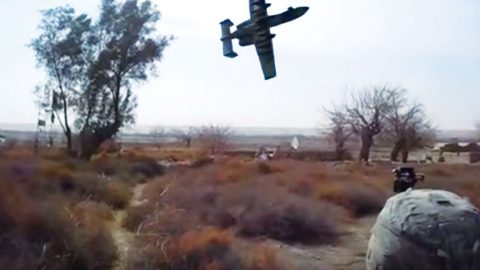 Here though, you’ll see a nice sunny day in whatever desert town in the middle of nowhere these grunts had to patrol. No guns blasting nearby, no bombs going off in the distance. It seemed to be one of those days things were cool.

The A-10 Thunderbolt II is arguably the best CAS platform ever created.

To top it off, they got treated to not one, but two really sweet A-10 flybys. One went right up to them, banking pretty low over their position. The other was a bit further in the distance but did a nice dip before pulling out.

As military aviation fanatics, we get really riled up hearing the whine of those engines though. They’re so distinct. Almost sexy.