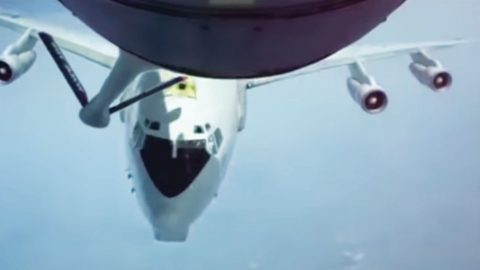 Talk About A Pucker Factor.

The ability to refuel mid-flight is a integral part of the United States military. It gives crews the ability to make longer flights, extending their mission time and also the ability reach places in the world they could otherwise not get to.  This simple ability changes the way we strategize and the way we move about the world.

Having said that, this ability doesn’t come without risks. Although we do have state of the art technology that makes tis task easier, it’s not always so. Take this video for example.

An E-3 Sentry (AWACS) needed to get some gas. These planes are particularly important as they’re responsible for weather surveillance as well as command, control and communications between the United States Air Force and members of NATO. Without them, choreographing multiple forces around the world would be hard.

Having said that, the approach to the tanker (probably a KC-135) seemed normal. Then out of nowhere, one of the planes lost control and nearly smashed into the other.

Judging by the horizon line, we’re guessing it was the tanker that dipped down. The operator also retracted the boom right before it happened, so that might be an indication of a preemptive counter measure.

Either way, the story ended well. Although extremely close, both planes and crews survived to fly another day. The only thing we want to know is; did they go for a second turn or did they scrap the idea for the day?