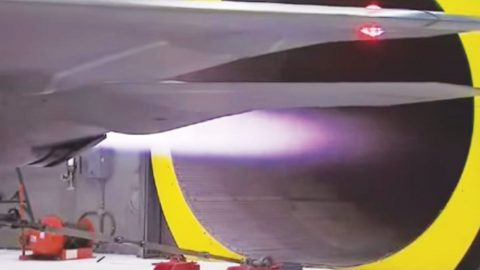 This is for all you gear heads out there. If you’re not into that sort of thing, then you might find this short video a bit boring. For us however, seeing a new plane test its engines is something else. The sound and simply look of it gets us all hot and heavy. The only thing better would be to actually be there and be able to smell it to. We know, we’re a bit weird.

Every time a new plane is either built or has an engine replacement scheduled, the newly built engines have to be tested. This makes sense. Although they’re built with the utmost precision, testing is the final stage they have to go through. They’re checked for leaks, temperature changes as well as other abnormalities. If all goes well, they’re ready to takeoff.

What you’ll see in this video is the F-22 Raptor testing its Pratt & Whitney F119 jet engines, then kicking it into afterburner so we can all enjoy that mesmerizing blue flame. Talk about efficiency!

These engines were actually designed specifically for the F-22s. One of these babies can produce 35,000 lbf. of thrust which amounts to 22% more power than a comparable jet in its class and is also a lot easier to build. Now that’s ingenuity.