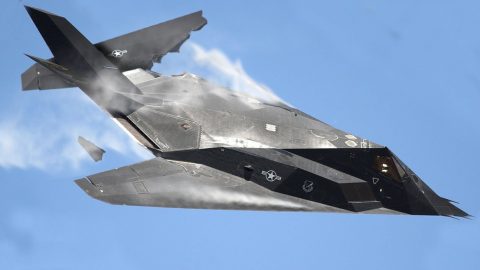 We’re Pretty Sure Wings Belong ON The Plane.

Airplane mechanics are notorious for quadruple checking their work, as they’re the ones pilots trust with their lives. From simple tasks such as checking tire pressure to making sure the aircraft is structurally sound, these guys have a lot of pressure on them to perform.

This is why this video is quite perplexing. During an airshow in Baltimore in 1997, an F-117 was showing off its glory. What happened next was almost unbelievable. While performing a roll, the left wing literally disintegrated sending the plane into an uncontrollable spin.

F-117 Nighthawks are stealth aircraft which first flew in 1981 and were kept secret for almost a decade.

The reason? The subsequent investigation uncovered that 4 out of 39 fasteners were left off while mechanics were reinstalling the wing after an overhaul. Now, that might not seem like a lot but this video will show you the result of such a mistake.

When the wing fell off mid-air, you’ll see that the pilot did not immediately bail out. He tried to regain control of the aircraft (which was impossible) but also steer it away from the crowd and nearby residential homes.

Although some homes were damaged by the crash, no one was injured on the ground. The pilot sustained minor injuries after ejecting, but overall this was quite a great ending to what could have been a tragedy.