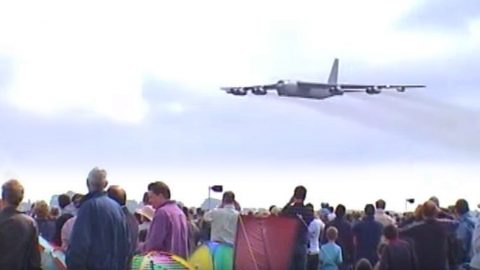 Man Oh Man That Was Awesome.

It’s a little heartbreaking that most of the best flybys, buzzes and overall most exciting videos are always decades all, but hey, at least we get to see them. Our best guess is that regulations were a bit looser back then and pilots were able to fly faster, lower and closer to spectators than they can now. Safety is good of course, but you just lose something that really drew in the crowds.

The quality of this particular video isn’t the greatest as it was filmed in 2004, but you can clearly see what is happening. Filmed at RIAT (Royal International Air Tattoo) these folks were lucky enough to see a B-52 Stratofortress ripping through the sky right in front of them. To be perfectly honest, we never saw one going this fast in real life.

To add to the video, the person filming also caught a pretty spectacular taxi scenario. Once it landed, the B-52 rolled down the runway at a pretty aggressive angle. Most people don’t know this, but Stratofortresses have landing gear that can pivot to a certain degree, allowing it to land and taxi while crabbing but without the need to straighten out.

The more you know.